After a spell in the doldrums of legal wrangles, BING SELFISH is riding the crest of a wave. A single, an LP in the pipeline and another triumphant tour. Conrad Seagrote (eventually) fired the questions to the elusive chanteur. 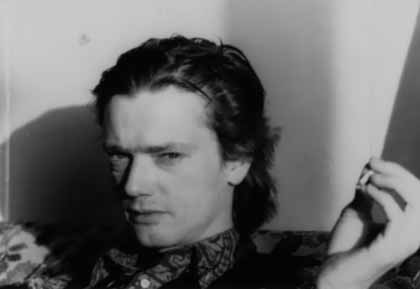 After many days of trying, and about a hundred phone calls, we managed to get an agreement from Bing Selfish and/or his so-called "management" (who seem more intent on spinning a web of intrigue around their protege than operating a communicative and accessible system) to stage an interview. Typically, after many promises and broken engagements we were telephoned at 2.30am and told to come immediately to an address in South London because Mr Selfish could give us a "little time"!

Arriving in a flurry, we took the lift up to the penthouse level and were shown into a luxurious flat wherein we found Selfish reclined on a sofa apparently asleep, but appearances are not everything with Mr Selfish as we soon found out. "Good evening, gentlemen," he drawled, and his eyes flashed open. But he remained in repose for the duration of the interview, his only movements the slightly impatient gesturing away of tray after tray of delicacies proffered by the noiseless staff. It would be innacurate not to mention the presence in the room of another person, a bronzed Scandinavian youth who pirouetted around the room disco dancing and dusting at the same time. He was also notable in that he wore only a loin cloth and his body glistened with oil...Selfish's eyes followed him carefully.

It has been mooted that your lifestyle shows signs of decadence. How do you feel about that kind of comment?

"I think music is really important in bringing the people of the world together and making them forget their differences."

"I think it's important to get the message over that the people of the world can communicate on a common level, and music helps."

It has been levelled that you represent a bizarre tangent of the "acid scene". Do you accept that?

Where do you get your shirts?

In your latest single, 'Government of Love', which you say you wrote with Bob Dylan, critics have found references to illicit substances. With the sixties apparently in vogue, are you not jumping on the bandwagon a little?

"Bob is a very warm human being."

You were called "the new Jeff Beck". Any comments?

"I can't really comment on this because the whole this is sub-judice at the moment, but I will say that the British press is the worst in the world. I obviously have nothing but respect for Jeff himself."

One question everybody seems to be asking is whether it really was you playing the bass with Chic on 'I Want Your Love' and not Bernie Edwards as credited.

"Well, it was a while ago now, I can't recall that well, I was just with the guys, you know, we were just hangin' out really, had a couple of drinks, did a thing...it seemed like we had a groove, but I didn't think much about it..."

Your new album is rumoured to contain personal attacks on certain figures of the English Literary establishment, and Anthony Burgess in particular...

(Laughs) "Me and Tony go way back, or course he's not offended by that song, he's the kind of guy who can laugh at himself, in fact he's contributed a line or two..."

But you refer to him as 'just another old sod from the new fashioned right'!...

The Ideals, your backing group, some people say that you use these unknowns simply for reasons of economy.

In view of your growing popularity, especially amongst youth, do you feel any responsibility to your listeners?

Thank you. (At this point we were being ushered out of the room by Mr Selfish's personal assistant.)